Chihayafuru 2×20 "Near the Rice Paddy" 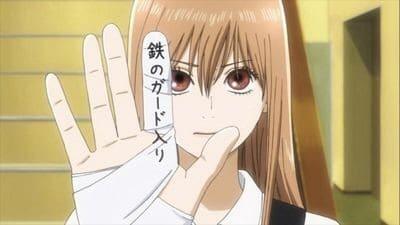 After Misuzawa receive their award for winning the tournament, Taeko takes Chihaya to a clinic to see to the injuries to her hand. Meanwhile, Arata walks Taichi and the others to the station, where he reveals that he plans to go to a college in Tokyo if he wins the individual tournament, much to Taichi's dismay. Chihaya is informed by the doctor that she has a chip fracture and should not do any intense karuta. After receiving from shirts from Yusei's sister though, Chihaya remains determined to play in the individuals, deciding she will play with her left hand instead. As Chihaya is drawn to go against Fukui's Keiko Yuube, she becomes more determined after seeing both Arata and Shinobu are competing. As the Class A tournament begins, Chihaya finds using her left hand is a lot harder than using her normal hand.