Chihayafuru 1×07 "Would Anyone Sojourn There? As Autumn Comes, They Do Too" 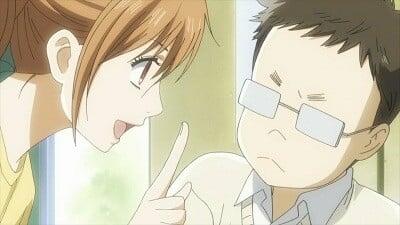 As Taichi laments that he's can't match Chihaya's skill level, Chihaya scouts a bookworm named Tsutomu Komano for the club, literally dragging his desk with him to the clubroom. Wanting to become smarter to become the number one in school, Tsutomu challenges Chihaya and Taichi to play a game with the cards flipped over. With this new rule, Taichi gains an advantage over Chihaya, whose memorization skills aren't as developed, and wins against her. After the match, Tsutomu laments that he lacks friends and talent, but Taichi tells him that he keeps playing, even if he keeps losing, for the reward of winning. Hearing this, Tsutomu decides to abandon his desk and join the karuta club.