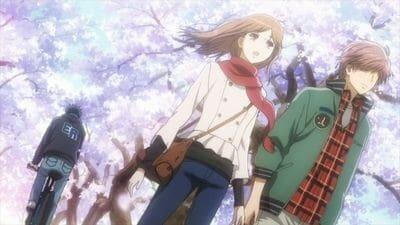 Following the call, Chihaya decides to go with Taichi to Fukui so she can confront Arata. However, Arata is not too pleased to see them and becomes aggressive when Chihaya brings up karuta again. Arata's friend, Yuu, explains to Chihaya that his grandfather died of a relapse while Arata was playing at a karuta tournament, the guilt making him unable to play karuta again. After Arata reads a letter that Chihaya wrote for him, he still holds his friendship dear and goes to see Chihaya and Taichi off as they head back towards home, with Chihaya able to make out that he doesn't completely hate karuta. On the ride back, Taichi agrees to help Chihaya form a high school karuta club, so Arata will have something to return to.