Chihayafuru 1×03 "Bright, but With Snow" 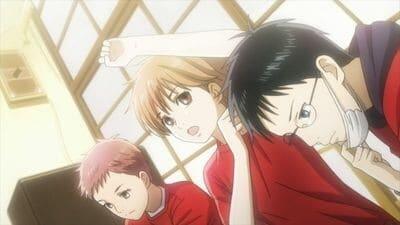 Chihaya, Taichi and Arata go to a karuta society where people practice competitive karuta. There, they are challenged to a three-on-three match against some of the regulars. Arata takes charge for most of the games, leading to some competitiveness within the team as well as with the opposing team. After winning the game, the group learn of a team tournament and start training for it. Later, Chihaya learns that Taichi is going to a far away middle school and Arata is going to return to Fukui after he graduates, meaning they will not be able to keep playing karuta together. At the thought of this, she becomes upset and refuses to enter the tournament. However, after some advice from her karuta mentor, she decides to join them after all, accepting that she is not the only one who will be lonely. After graduation, Chihaya challenges Arata to one final match and promises that one day they will meet again.