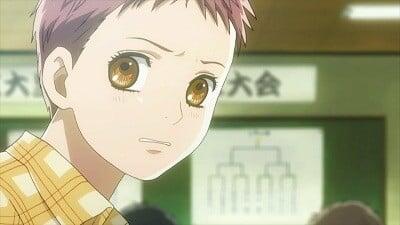 As everyone starts to ignore Chihaya as well as Arata, Chihaya stands her ground, boasting about Arata's karuta skills. Taichi makes a bet that if he can beat Arata in a tournament, he will be ignored until graduation. As both Taichi and Arata make their way to the final, Taichi steals Arata's glasses, making it difficult to see. Although Arata manages to cope on memory alone, Taichi swaps the cards around to make things difficult. It's at this point that Chihaya offers to take Arata's place in the match, using her instincts to tie with Taichi. On the final match, Chihaya starts seeing things through the eyes of a karuta player and takes the final card, winning the tournament. However, Chihaya becomes a bit upset when her family doesn't acknowledge her achievement. As Chihaya resumes her search for Arata's glasses, Taichi returns them to Arata and apologises for his foul play.

Chihayafuru 1×03 "Bright, but With Snow"